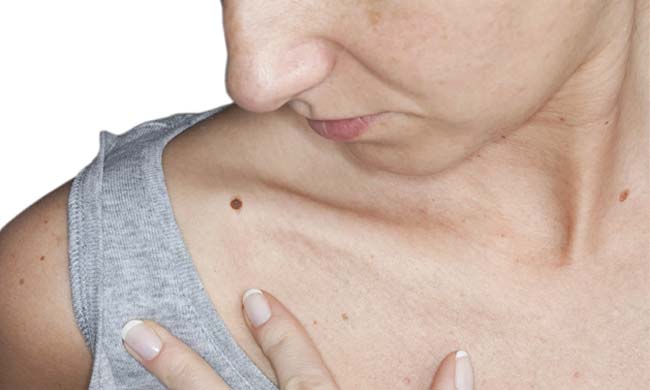 Skin tags are small soft mass which is the result of extra skin growth. They are not harmful but can be annoying and hence can be an issue for cosmetic reasons.

The exact reason behind the skin tags is unknown till yet. They are thought of the result of decreased cell destruction process around the affected region. Some of the observations which are found until now are listed below.

Treatment for skin tags is not necessary but recommended if it is present on your face or some other part which is exposed in public. There are two methods which are widely used by doctors to treat skin tags.

Moles are grown on the skin and it is made of masses of melanocytes and the pigment-producing cells of the skin. It may be tan, brown, black, red, and purple in colour.

Moles are categorized on the basis of the development and placement on the skin. Below are the types of moles:

Common mole: A common mole has distinct edges and pigmentation. It is 5-6 mm large. They are mainly found in a sun-exposed area of skin.

Atypical moles: Atypical moles have blurry borders. They have flat and raised component.  Their colour is different.

Congenital moles: These moles are usually seemed at birth and within the first year of birth. Its main cause is melanocyte cells in dermis and epidermis. Sometimes, it is referred to as birthmarks.

Benign moles: These are small colour spot on the skin. It can be flat and raised. They are symmetrical in shape. Their borders are smooth.

Junctional melanocyte nevi: These moles usually occur in childhood and adulthood. During this age, it is usual for melanocytes to exodus down to deeper layers of skin. They vary in colour from tan to dark brown.

Moles get raised when cells in the skin are growing in a group rather of being proliferation throughout the skin. They build the pigment which gives skin its natural colour. Moles get dark after exposure.

Moles are common and do not need treatment. But sometimes they are needed to be removed because it might cause a risk of skin cancer. Different methods of the removal are listed below but it has to be done by an expert cosmetologist or by one of the best skin specialist.

Laser treatments are also used to remove moles from the skin. It is one of the effective ways for removing moles in the skin, but it needs to be the done by one of the best cosmetic dermatologist.

Warts are the small extension of skin tissue, which is of flesh-coloured, pink and white. It is mainly affected by Human Papillomavirus (HPV). It is a form of viral infection that can spread from person to person, or to other parts of the body and from any surface to a person.

Warts normally appear on hands and fingers. The common signs and symptoms of warts include:

Skin tags, moles, and warts are common skin issues, but is important to visit a good skin clinic or a good dermatologist before deciding on any treatment.